Home » Seasonal » Lent » Why do we eat pancakes on Fat Tuesday? 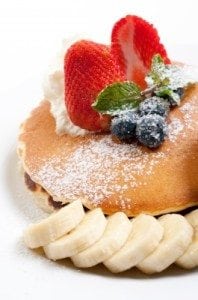 Tomorrow is Fat Tuesday, a.k.a Mardi Gras or Shrove Tuesday. It always falls on the day before Ash Wednesday which marks the beginning of Lent.

So, why do we eat pancakes on Fat Tuesday?

Lent is a 40 day period of self-denial, and during Lent many Christians abstain from eating meat on Fridays. In the early church, many abstained from eating all animal products during Lent including lard, egg and dairy.

Now you know how the tradition of eating pancakes on Fat Tuesday began!

In the spirit of Fat Tuesday, why don’t you have a pancake feast tonight? Try my homemade pancake and syrup recipe – it’s a frugalicious and fast dinner!