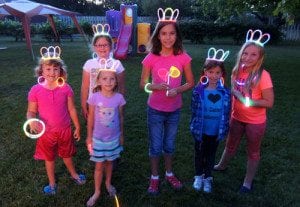 Light up your Halloween night with these cute glow princess crowns. They are a simple and inexpensive way to add a royal spark to any princess costume…just follow this Glowstick Princess Crown Tutorial.

These glow crowns are incredibly fast and easy to create.

For each crown you’ll need:

The next three glow sticks will be attached to the top of the crown with clear tape. Cut six pieces of clear packing tape that are about 3/4 inch wide and have them ready for use. 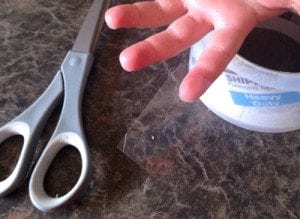 Place the tape on the end of the glow stick. 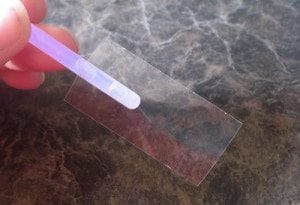 Attach the stick to the front of the crown’s circle with the tape. You will be adding three, so start the first stick about an inch from the connector piece so there is room for you to add all three of the crown loops. Just wrap the tape around the bottom of the crown base and then up the back. The tape should be sticking to itself. Press it tightly so the stick doesn’t slip around. Repeat this process until all three of the glow sticks are attached.

It’s as simple as that! 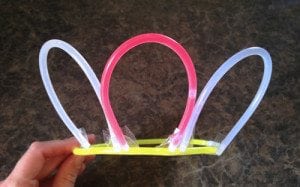 The clear tape allows the glowing light to shine though, so you hardly notice it in the dark. 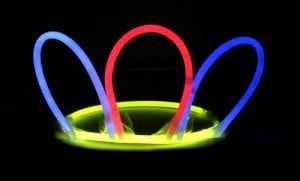 I found that unless the girls were acting just like princesses, that their glow crowns tended to slip off their heads. This problem is easily solved with a few bobby pins. Slip a piece of hair up and over the crown and then pin it is place with the bobby pin. I did this on each side of the crown and it helped secure it in place for active play. 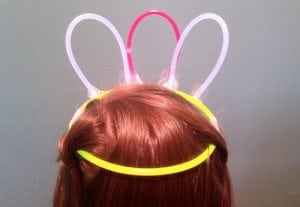 P.S. – If you’re headed to Disney, these are easy enough to make in your hotel room and will save you a ton of money on light-up souvenirs in the park!