Home » Diet & Fitness » Skip These 15 Organics to Save Money

Buying organic is the latest trend in healthy foods. Organic foods are those that are grown without using pesticides, synthetic fertilizers, ionizing radiation, genetically modified organisms and sewage sludge. Animals producing meats and dairy products are not given antibiotics or growth hormones. In a general sense, organic foods are natural.

The reason you may want to choose non-organic foods over organic is price. Organic foods are notoriously more expensive. It takes more work to make organic foods because there are no chemicals involved; there’s a high demand for organics now; and it’s costly to farmers to obtain organic certification. 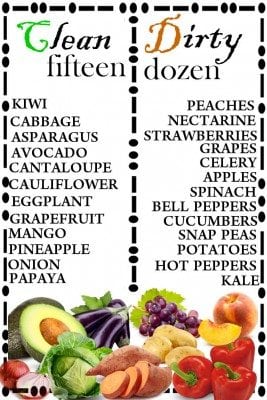 As much as it’s wise to purchase organic foods as much as possible, there are some foods you don’t need to buy organic because there isn’t any difference in the way that they are produced. The following are some of the foods you can save money on.

The Clean 15 are foods that the Environmental Working Group came up with to identify those that are grown with little to no pesticides. Understanding why these have been selected can make you feel better about buying non-organic ones.

Kiwis are in the Clean 15 because they have a tough outer skin that keeps any pesticides from getting inside. You should still wash the outer skin because you don’t want anything that is on it to get into the kiwi part that you consume.

Cabbage is okay to but non-organic because it has a bitter taste to humans and insect. They do not favor this vegetable, so farmers don’t have to worry about treating them.

Asparagus has the same effect on insects. They would rather eat up the leaves of something much more sweet.

There’s no need to worry about avocados either. The tough cover around them keeps the inside delicious and healthy.

The cantaloupe has a hardy exterior that keeps pesticides from getting into the juicy, delicious part of the fruit. This makes it easy when you’re faced with a large selection of cantaloupes and you find that the non-organic ones are much less expensive.

Cauliflower is another bitter tasting vegetable to insects. You don’t have to worry about these being contaminated with pesticides.

Eggplant may seem like it has a flimsy skin on it, but it’s actually quite resistant to bugs and insects. Farmers know this, so they don’t bother wasting their pesticides on them.

Grapefruits are perfect to purchase non-organic. Their skin is the protection they need.

Mangos are sweet, so insects love them. However, you don’t have to worry about it because non-organic ones do not end up with the high concentration of chemicals like other non-organic foods because of their tough skin.

Onions have a paper like covering on them that protects them from the outside world, including insects. It may not seem like that covering is effective, but ask any farmer, and you’ll hear that they do not need to use pesticides on them. It probably has to do with the sour taste and smell of them too.

Papayas are sweet, which makes them attractive to insects and bugs. The skin makes them a great non-organic fruit.

Pineapples are again a great non-organic fruit because of the thick, tough shell. There aren’t too many bugs and insects that will be able to get through that exterior.

The thick husk protects sweet corn and farmers are thrilled by that because their cornfields are usually enormous. It would cost a lot of money to treat all of the corn stalks.

Sweet peas are in a pod. That pod is what protects them from insects and any pesticides it may come in contact with as they grow.

Sweet potatoes are in the perfect environment for bugs, but they don’t have to worry about it. Insects and bugs stay away from them because they don’t seem to think they are as good as humans do. Farmers don’t need to treat them with pesticides for that reason.

Even though the Clean 15 provides a great list of foods you can buy non-organic, there are some others that are just as good as organics. Consider these foods as well when you’re shopping to pay less at the checkout counter.

There is no difference in the way organic and nonorganic maple syrup is made because it doesn’t usually need any pesticides or chemicals.

Farmers don’t usually spray quinoa crops with pesticides because they have a bitter taste. Pests avoid them for that reason.

That thick green exterior protect the deliciousness inside of the watermelon, so you are safe to buy this fruit nonorganic.

Mushrooms are nutrient rich and aren’t produced with a ton of pesticides. Actually, it’s one of the least pesticide-ridden veggies.

Along with the Clean 15, the Environmental Working Group also produces a Dirty Dozen list. These are foods that are produced with high amounts of pesticides and are best purchased organic. Three additional vegetables have been included in the list this year.

Tips on Saving Even More Money

Now you know the foods that are possible to buy nonorganic so you can save money. There are few other ways you can save even more money when shopping for food.

Choose produce that isn’t completely ripe when you buy it unless you are going to use it that day. There’s nothing worse than buying produce only to throw it away the next day or two days later because it expired.

Other Produce with Tough Exteriors

Think about the products you’re buying to decide if nonorganic is going to be OK. Many of the foods on the Clean 15 and Dirty Dozen lists have an outer layer that protects the insides. That means if you find produce that isn’t on the list but has a tough exterior, you are probably fine purchasing nonorganic.

You can save a lot of money when you grow your own vegetables and fruits, and they are all organic. When you have an overabundance, learn how to freeze them because you’ll be able to use them throughout the year.

Watch for Changes to the Lists

Check the EWG website yearly to find out what has been added to the list. Since farmers change the way they produce foods, the EWG has to update its lists every year. You can save money by staying up to date on which nonorganic foods have been given the green light to purchase.

Buy What You Need

If you’re not planning on storing nonorganic foods, don’t buy too many at one time. The more you buy, the more likely you’ll end up having to throw them away because they rot.

There was a time when people could only eat fruits and vegetables when they were in season. It’s still a good idea to buy produce in season, since they are cheaper and fresher then.

Take a look at your grocery shopping list and place a star next to the nonorganic items you can purchase. When you go shopping, write down how much the organic versus nonorganic foods cost. When you get home, add it up to see the price difference. You’ll likely feel so good about your savings and you won’t have to worry about the toxins.

What other ways do you save money on your produce? Share your tips in the comments below!

Adrienne Erin is a healthy-living and budget-conscious freelance writer and designer. You can see more of her work on her blog, Foodie Fitness, or by following @foodierx on Twitter.

This is good news; I’m a totally coenincvd believer in organic food. The problem is I live in town; Emmaus by the way, Maria, and I do have a garden. And I buy as much meat and dairy organic products as I can, as well as organic baking ingredients, granola, cereal, fruits, etc. The problem is finding all this wonderful organic foodstuffs. I have a full time job and watch my beautiful granddaughter almost every day. I simply cannot cook from scratch every single day.The local stores are severely lacking in good quality organic food. The grocery stores are catering to a populace suffering from the economic downturn; I’m actually seeing less organic food on the shelves of a certain large grocery chain. Now I am willing to look for organics; but I’m only willing to travel so far to get them. So how do you convert the other 42%… Read more »