Home » Frugal Living » Best Places to Start Over with No Money 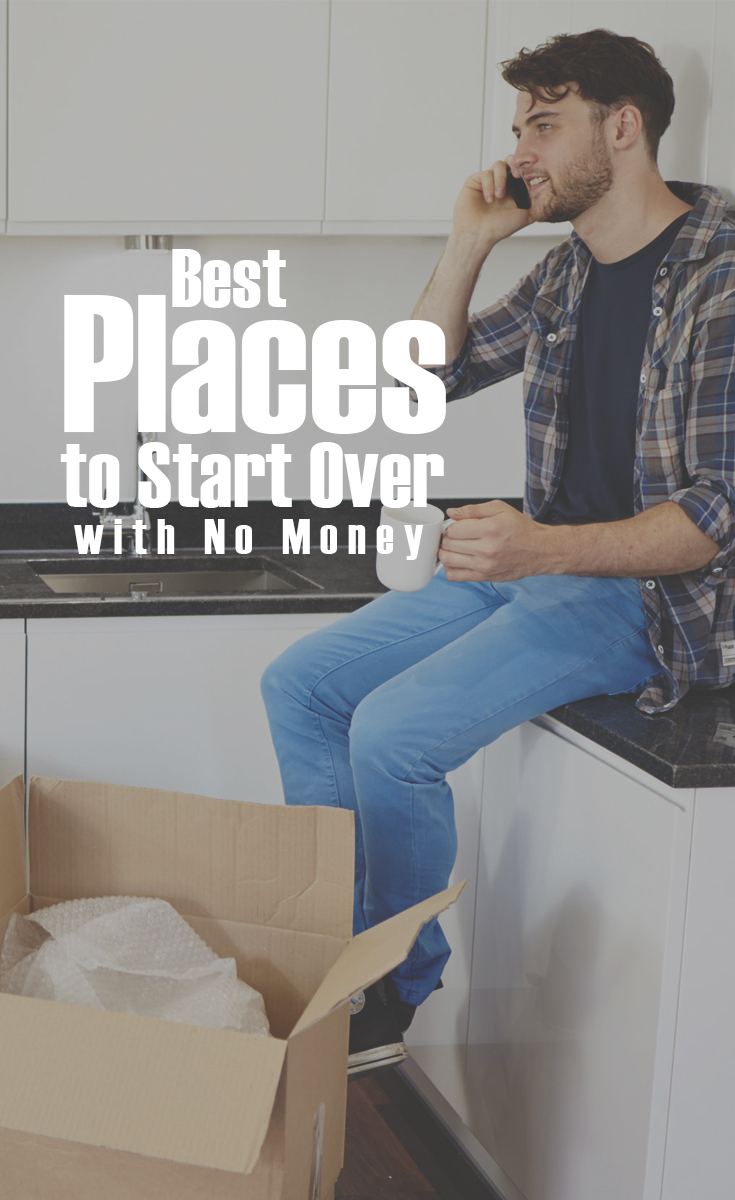 Have you reached that point where you’re bored with life and want a fresh start? Many people have felt that way in their lives. Whether you’re 18 and just graduated from high school, fresh out of college, in your 30s, suffering from empty nest syndrome or just tired of your current, a new life in a different city or state (or maybe even a different country) may be just what you need.

Don’t let your current financial situation stop you from enjoying a new life with a different scenery. After all, you could be missing out on cool people, fun events and the job of your dreams. Are you ready to make a move? Consider these places as your next home.

While Durham is home to Duke University – one of the most expensive schools to attend – Durham in general is easy on the wallet. In 2011, the city was named one of “America’s Best Cities for Young Professionals.” It’s also known as one of the most affordable cities in the United States. It was also ranked seventh in the United States as having the best quality of life overall.

The unemployment rate in Durham is not much less than the national average, but income growth is at 3.3%. Downtown Durham is seeing some improvements, with many of the old buildings being converted into housing and retail spaces. Plus, nearly 34% of the population consists of single adults, so if you’re looking to meet someone special, you have a good chance of making a love connection.

When you think of places to move to, South Carolina may not immediately come to mind. However, its capital, Charleston, has many things going for it that make it attractive to those in need of a new job, new love or new start. Unemployment is below average and the city is a growing hotspot for the technology industry. Incomes in Charleston are growing by nearly 4% and more than 31% of the population consists of single adults, so if you’re looking for love, you’ve come to the right place.

Charleston is also known for its strong tourism industry. You can find jobs in this area or at least meet a lot of friendly people along the way.

If you’re looking to set roots in a city that’s fairly large but has a country feel, Oklahoma City is a good place to start. It’s a great place if you enjoy warm weather, with the average temperature of 72 degrees. The population is growing steadily, but employment prospects are still good. You can work for the federal government, the energy industry and even the growing tech industry.

Utah gets a bad reputation for being home to a large Mormon population, but it’s a great place to start even, if you’re not religious. Provo is especially great for those starting over and in need of a job. The unemployment rate is at just 4.6%. There are many employment prospects in Provo, such as Novell Software, Ancestry.com and Nature’s Sunshine Products.

Income growth in Provo is at just under 3%. Thirty percent of the population is comprised on single adults. Provo is also known for its cool mountain air, so it’s a fun place if you enjoy hiking and exploring the outdoors.

Iowa may be known for its corn fields, but Des Moines really has it going on for those in need of a change in scenery. It has been ranked the “Best Place for Business” in 2010 and one of “America’s Best Cities for Young Professionals” in 2011.

Income growth is at 2.6% and the unemployment rate is one of the lowest in the country, at 4.6%. Des Moines is known for its burgeoning insurance and financial industries. It’s also known for presidential politics, so you’ll always have a job in that field, if you so desire. Des Moines is also home to Adventureland Park and the State Fair, so there are thrills to be had in this not-so-boring town.

If you’re seeking the thrills of New York, but are petrified of living in New York City, consider Albany instead. The state capital boasts a 6.4% unemployment rate and 2.6% in income growth. Nearly 33% of the population consists of single adults, so if you’re looking for someone special in your hometown, consider Albany.

In terms of employment, you have many options. The government and economic industries are quite strong. Health care companies are popular in the area and the tech industry is also on the move. If you currently live on the West Coast, living on the East Coast will be a nice change of scenery.

Known for its farming and the fact that it is the home of Warren Buffett, Omaha probably isn’t first on your list for places to move to. Omaha, however, is a place where the poor and rich can coexist peacefully, so even if you don’t have as much money as Warren Buffet, you can still make a great life for yourself here.

If you enjoy music, Omaha has a burgeoning music scene. The city is also revitalizing its downtown areas to create more buildings and jobs. The two biggest employers are ConAgra Foods and Mutual of Omaha. Omaha is also known for Reuben sandwiches and a fun place called Cool Stuff, which boasts tie-dye clothing, Halloween costumes, CDs and incense. If you’re looking for a laid-back environment with a country feel, don’t overlook Omaha.

No, Bali isn’t located in the United States, but who says you can’t start over in another country? An island off of Indonesia, Bali has it all, from beaches to mountains to rice paddies. Bali is not only a gorgeous place to live, but it’s also surprisingly cheap. The average one-bedroom place costs just $200 a month. Food and groceries are also much cheaper in Bali than in the United States. You can eat like a king there for very little money, so if finances are a concern, consider Bali.

Many former American citizens have gone on to live in our neighbor to the south. While not all cities in Mexico are affordable (or safe), Mexico City, Los Cabos and Sayulita are some great places to consider. They are also budget-friendly. The most expensive places in Mexico charge $750 a month to rent a one-bedroom apartment. That’s probably a better deal than what you’re living in right now. Mexico is a great place to truly get away from it all without having to jet halfway across the world.

if you’ve always dreamed of living in Europe, but can’t afford Paris and the like, consider Portugal. Portugal is not too far from France, plus it’s extremely affordable. Portugal is a hot spot for travelers, but if you want to live there, you won’t have to break the bank. In the city of Porto, a one-bedroom apartment can be yours for a budget friendly $500 a month.

Thailand may seem a bit too much for many people, especially Bangkok, which is home to more than 8 million people. However, there are many other cities to consider in this beautiful country, which boasts gorgeous beaches, royal places and temples. Consider visiting it first, as most of those who do instantly fall in love.

If you do decide to move to Thailand, you’ll save a ton of money with the cost of living 44% lower than New York. You can eat for just several bucks a meal. You’ll have access to some of the best food in the world. Plus, rent is affordable, with the average rent in Bangkok at around $600 a month.

Being a stranger in a strange land can be a frightening experience, but you can make it work, even if your finances aren’t in the best shape. Many people have got up and moved to new cities to start over. You won’t be the first and you definitely won’t be the last.

If you’re bored with your life and ready to start over, consider one of the cities listed above. You may think that running away from your problems isn’t the answer to the difficulties you are facing in life, but sometimes it is. A change of pace in a city far away from bad memories and toxic people may be just the thing you need in your life. So pack your bags and start planning a move today.

The capital of South Carolina is Columbia, not Charleston

But what if you’re actually starting over, have no money, no job. Then how much you make where you live vs how much it costs to live there is what matters.

I just want to say that this is a great article but are there any places in Tennessee.

Okay article but Durham is not an affordable or ideal place to start over. The crime rate is through the roof, homelessness is out of control and people are living in hotels because they can’t afford rent. Durham is also defunding their police departments significantly.

Awesome post. There is one mistake that I saw in the article and that was stating that Charleston is the capital of South Carolina. It is actually Columbia. Great article!

Great article! My only comment is towards the section on South Carolina. Charleston is not our capital city, Columbia is.

Disagree 110% with Charleston, South Carolina as a place to move to!!! In fact, if you had done the research, you would have immediately discovered that over 50 families statistically move here daily, the city (as a whole) is 20+ years behind in proper infrastructure, and after having been voted now as a #1 travel destination for well over a decade, we can no longer handle the influx of traffic and our roads are congested all day, every day, 24/7!!!!!! If there is one accident or heavy rain, which we get a lot, plan on being at gridlock for hours!! Again, we have very old + historic infrastructure simply because the real Charleston was meant to stay quaint and preserved. Of course, that’s not what has happened. We are now an overcrowded disaster area with constant gridlock, a mess of drivers, and nowhere to go most of the time because… Read more »