Home » Make Money » Career » Uber Driver-Partner Best Practices: How to Get the Most From Your Uber Driving Experience 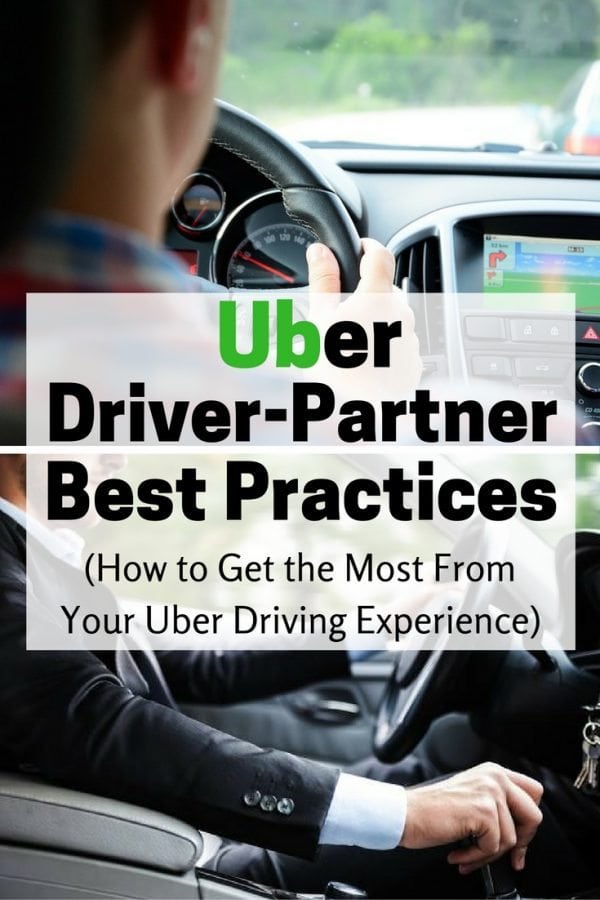 So you took the plunge and became a driver for Uber.  Good for you, and congratulations!  It’s a great way to make extra money.  Whether you’re looking for something that can make you a bit of extra spending money each week, or even trying to find ways to have some form of regular income, Uber is a great addition to your new “Freelance Lifestyle.”  As with anything else, there are always things you can do to make your experience both more profitable and efficient.

In this piece, we’ll reveal several insider tips and tricks that will see you maximizing your freelancing profits, day after day.  Note that in the writing of this piece, we’re going to be making the assumption that you’re interested in diving headfirst into the “Freelance Lifestyle” and are interested in earning a full-time income.  If that doesn’t describe your situation, you can still make use of these tips, but the amount they add to your bottom line will be less simply because you’ll be spending less time on this job.  That said, let’s get started!

Let’s start with something fairly basic, but that gets overlooked by a surprising percentage of drivers (especially new drivers).  In any business, there are two fundamental ways to make money.  Sell more of the product or service you’re offering, or reduce your costs.  From the perspective of your wallet, both are equally valid approaches, so you need to pay attention to both sides of the equation.  While on the face of it, you might think that the only real skill you need to become an Uber driver-partner is the ability to drive, the bottom line is that if you can change your own oil and perform basic auto maintenance and repairs, you’re going to make more money simply because your operating expenses will be lower.

The same line of thinking applies to the KIND of car you use for ridesharing.  Picking people up in a Prius or Tesla is going to be more profitable per ride than picking them up in a Hummer or other “urban assault vehicle.”  Even if that’s not something you can change right now, if you’re planning on making Uber a regular part of your life, then you’ll definitely want to think about the total operating costs of whatever car you buy to eventually replace the one you’re currently driving.  Details like these really matter in terms of your bottom line!

Many new drivers (and unfortunately, more than a few seasoned ones) get super excited when they get a fare surge notification, and race off to the location where fare rates are spiking.  The problem with that approach is two-fold.  First, more often than not, by the time you actually get to the area, the surge is going to be over, and second, everybody else got the same notification you did, and now, the area is flooded with Uber driver-partners.  Getting a fare is going to be almost impossible, which means you drove out empty, and you’ll be driving back empty too.  Not good for your bottom line.

The good news is that there’s an easy fix for that.  You know your city, and you probably know where the hot spots are, and when demand is likely to peak, so get there ahead of time!  If you wait until you get the official notification, then you’ve waited too long.  Even if you don’t know where the city’s hotspots are, you can get a good idea by watching where the fare surges pop up, and keep track of them.  Over the span of a few weeks or months, you’ll see a clear pattern develop, and simply plan to be on scene at ready to accept riders before the announcement ever goes out.

Business Cards – You Need Them!

The specifics of the promotions offered by Uber vary from one city to the next, but the bottom line is that you make cash by referring both drivers and riders to the system.  Business cards can often be printed for nothing (Vista print and similar offers online), or for such nominal cost that it may as well be nothing, and these sign-up bonuses can actually add quite handsomely to your bottom line.  You should always carry some with you, and hand them out every chance you get.  If you frequently stop into the same places for lunch, gas, or drinks, see if the owners of the establishment would object to keeping a supply of your cards on hand.  Most won’t, and you won’t have to change anything about your routine to be certain they’ve got a good supply.

Uber offers a minimum hourly rate guarantee, provided that you meet their conditions.  To do that, you need a 90% (or higher) acceptance rate, and an average of at least one ride per hour for any given week.  The top performing drivers, especially those participating in the UberX program for the budget conscious rider, will try to game the system by working as close to the 1 ride per hour minimum, thereby guaranteeing their hourly rate.  It may seem counterintuitive, but the way the Uber rate guarantee is set up, you can actually net more per hour doing this than taking every fare you can grab.

Leverage Is Your Friend

If you’re JUST driving around logged into your Uber app, you’re doing two things wrong.  First, driving aimlessly without a fare is costing you, so between fares, find somewhere to park and read a book, but second, don’t box yourself in!  Just because you’re driving with Uber doesn’t mean you can’t also drive for Lyft orSidecar if they’re operating in your city.  Also, don’t overlook other delivery services like DoorDash, Postmates, GrubHub, and others.  Even Amazon has begun contracting with individuals who are willing to pick up product from one of their warehouses and deliver it to anxious customers.

The point of all this is that while it’s certainly possible to register, log in as an Uber driver-partner and start making money if that’s all you’re doing, you’re leaving a lot of money on the table and not maximizing your earnings potential.  If you’re going to embrace the freelance lifestyle, then, especially in the early days, until you find your own perfect balance, it’s unwise to let any potential earnings opportunity slip through your fingers.