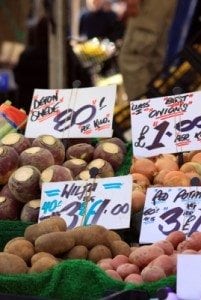 I recently read an article that touted 20 budget recipes that were as low as $1.50 per serving. While this sounds dirt cheap, it’s really not given the total cost. For example, a lasagna recipe was used (beef and exotic vegetables included), at 1.50 per serving with say 15 servings, this adds up to be $22.50 for a casserole dish worth of lasagna. This may be cheap to some, but not to me and not to those who need to survive tough times.

So I thought I would share some of my personal, health conscious recipes, that cost only cents per serving.

Spinach & Cheese Quiche with 5 Minute Homemade Crust: Use an in-pan quickie crust recipe and while this is browning in the oven for 10 minutes or so, whip up the quiche. 6 eggs for one 9 –inch pie pan then add a little salt and pepper, chopped up spinach and shredded cheese and a cup of whole milk. Mix and pour in the piecrust then bake for a 35-40 minutes. Easy, healthy and cheap; buying pre-washed organic baby spinach, I estimate this dinner costs about $3 to $4 per pan. One pan can easily feed a family of four. It’s also a huge hit with the kids, especially when served with some fresh cut up orange or watermelon.

Three Bean Chili with Sweet Corn Bread: Soak some different types of beans the night before for the best bargain (canned beans are slightly more expensive than their dried counterparts). Add them to a big pot with your seasoning, some stewed tomatoes and a vegetable (spinach, minced zucchini or squash, kale and many others work just fine). Use a few basic ingredients to make a corn bread and top with butter. Another favorite of the kids and very filling … and cheap! This recipe can be made for about $5 per pot, and you will have left overs!

Macaroni, Tuna and Broccoli Casserole: Cook a big bag of wheat macaroni or spiral or elbow pasta, drain and empty to a large casserole dish. Also steam a large head of broccoli after you’ve chopped it into florets. Open and drain a couple cans of tuna into the casserole and add shredded cheese throughout. Place in oven until the cheese is melted. Veggies, meat, dairy and carbs for minimal costs. This casserole will cost you about $5 to $8 to make, but you’ll have two days worth of food (either a second dinner or lunch already made the next day.

Shepard’s Pie: If you can find a good deal on lean ground beef – buy it, if you’re out of luck, opt for ground turkey. Cook this up in a skillet, drain and put into a casserole dish. While you’re doing this peel and boil several potatoes (white or red) and then mash and add to casserole dish. Add several cups of fresh, canned or frozen peas to the dish and then mix the whole lot together and voila! Simple, tasty and cheap; only about $5-$10 per dish with leftovers.

Clean Out the Fridge Veggie Soup: When vegetables are amassing in the drawers and far corners of your fridge and when you haven’t been grocery shopping in a while try this soup! Put all those veggies in a pot and boil with chicken broth, then add rice or pasta. This usually turns out very tasty and is healthy and cheap, costing around a few dollars per pot, depending on what you add.

1
0
0
0
Subscribe
Chefs Plate Review: Is Chefs Plate Worth It? - The Budget Diet

[…] Finally, it may be a great gift for a young adult just starting to learn their way around the kitchen or a foodie who wants to be pushed out of their comfort zone but budget-conscious families may not see a benefit here. Why not check out our five (really) cheap dinners that are good for your budget and health? […]