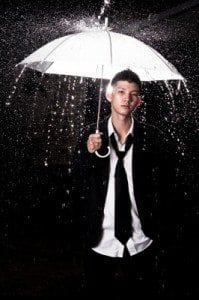 It’s that time of year where snow becomes rain and budding connections can turn into blooming romances. But if the stormy weather—not to mention tax season—is putting a damper on your potential plans, just dust off the DVD player, pop some popcorn and make a cheap date with that special someone. It’s the rainy day you’ve been saving up for, and here are 10 suggestions of all movie types to get you started:

1. Singin’ In The Rain: This gallivanting Gene Kelly musical is guaranteed to lift your spirits and put you in the mood for dancing and romancing. Feel free to let loose and do what the title says—just don’t forget your umbrella.

2. Sleepless in Seattle: It may be cold and wet for most of the year in Seattle, but this tale of fated love will bring warmth into your home no matter where you live.

3. The Shawshank Redemption: This 1994 prison drama is an epic tale of ingenuity, determination, friendship, and especially hope—all things a successful relationship needs. It also features Tim Robbins as the happiest man to be out in a driving rainstorm since Gene Kelly.

4. Remember the Titans: This inspirational gridiron drama not only shows how people of any background or race can come together, but it also features “Fire and Rain” by James Taylor and “A Hard Rain’s Gonna Fall” by Leon Russell, two of the best tunes ever penned about precipitation.

5. Spiderman: You know exactly why this 2002 superhero flick is on this list, and if you don’t, you’re missing out. Try doing some upside-down kissing of your own—it’s harder than it looks.

6. Breakfast at Tiffany’s: Long before Spidey and Mary Jane’s romantic rain scene, Audrey Hepburn and George Peppard had one of their own, which captured the hearts of millions of moviegoers in the early sixties and might just capture yours.

7. The Day After Tomorrow: If you or your significant other is the type of person that can’t stand the rain, this apocalyptic thriller is for you. Scenes of CGI-devastation will make you both thankful it’s only a rainstorm outside and not a new Ice Age.

8. The Birds: Close your eyes while watching this Hitchcock creep-fest and the raindrops hitting the roof might begin to sound like flapping wings. Good for couples that love to cling together during the scary parts.

9. Rain Man: So there’s not a lot of actual rain in the movie, but this Oscar-winning comedy-drama starring Tom Cruise and Dustin Hoffman can teach you and your partner about how differences between two people can bring them closer together.

10. BloodRayne: Last on this list for a good reason, German director Uwe Boll’s anemic vampire-video game disasterpiece is only recommended for couples that can appreciate how much fun bonding over a truly bad movie can be.

Written by Andrew Pryor for CupidsPulse.com.

[…] it’s raining in my neck of the woods, so this Rainy Day Movie list from The Budget Diet is perfect. And even if your tax day is not rainy, you may be feeling a bit of a financial crunch […]