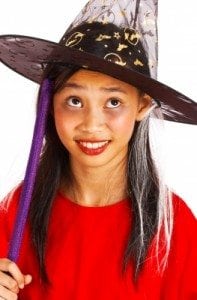 Halloween is a fun time of year for every kid and most all children take great joy in picking out their Halloween costume. However, for parents this means a substantial expense and one that seems to be growing as the years pass. A boutique catalog of kid’s only Halloween costumes arrived in our mailbox in early September this year and my preschool aged daughter gleefully looked through the pages citing several of her favorite costumes. I looked through the catalog and saw many beautifully crafted costumes priced at over $100 bucks a pop. Parents with two or three kids face could face a huge expense every Halloween, but they don’t have to – there are many places you can find great kids Halloween costumes for less.

2. Your Kids Closet
This will work especially well with younger children who are not as picky about their costume. Last year my then 2 and a half-year-old daughter wanted to be a princess for Halloween. She already had several tutus for dress up play and fancy hairpieces, so all I did was add a few accessories like a magic wand and glitter hairspray. My daughter was happy as could be and of course, looked adorable.

3. eBay, Craigslist and FreeCycle
Many people will sell old kids Halloween costumes just to get them out of their house in an effort to de-clutter. Again, since most costumes are used just once, you can find some great deals on costumes in near mint condition. These sources are also great places to find affordable costumes that are not run of the mill, if your child has a very specific costume in mind.

4. Free Costumes From Friends & Family
You most likely know many other people with kids. Ask around and see if they have any old costumes just laying around that you can borrow this Halloween. They most likely do and would be more than happy to give you the costume for free if their child has outgrown it and it’s just taking up space in one of their closets.

5. Online Discount Stores
Just search online for “cheap” or “discount” Halloween costumes and you’ll find several online retailers selling costumes for less. You’ll still be spending a good amount of money on costumes, but at least you will not be paying top dollar like you would shopping at specialized brick and mortar retailers like iParty and Spirit Halloween.

Jessica Drew is a freelance writer and editor who writes about several money making topics including frugal living, getting out of credit card debt and cheap flights.